Welcome! Beneath this text on the main page are my most recent posts. Class projects are listed in the left column, while more personal projects are in the right column

After having Eli-Kart for a while, I began to think about new ideas for electric vehicles. The things I really liked about Eli-Kart were the large platform, good ground clearance, sensored control, and high top speed. But there were also some things I knew I could improve on. For one, Eli-Kart is very short, making it a little scary to drive next to cars. Secondly, it was unbalanced, and the turning radius was relatively large, making tight turns impossible. Also, the battery life was a little limited and the acceleration was a little slower than I'd like (both not helped by the fact that I'm 6'6"). Finally, it didn't have many standard features luxuries such as a seat and brakes (although I did add headlights).

I took all of these into consideration when designing what I'm calling "iTrike". Perhaps paralleling my recent move from Cambridge to Boston, iTrike is a much more legitimate form of transport. I flipped the three wheel configuration so that is has two wheels in the back and one in the front. The back wheels are driven by high torque brushless motors, which I plan to run sensorless to save a lot of headaches. It has big 12.5" wheels with brakes build into each of the back wheels. It even has a comfy seat and footrests for maximum leisure. Here's the rendering: 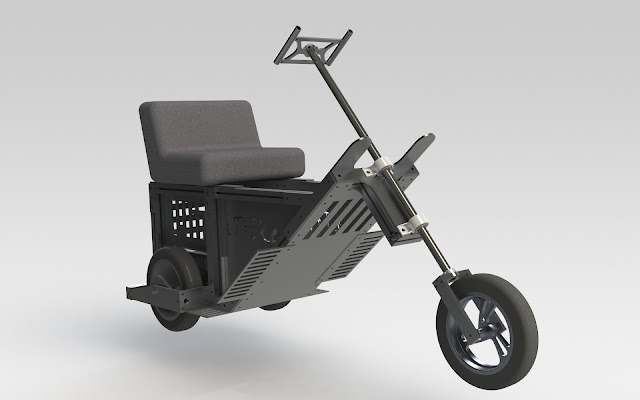 I haven't started making it yet, so I'm still trying to think about some cosmetic changes before waterjetting anything. I've been busy with my new job but I thought I would update here so it doesn't look like I've been up to nothing!
Posted by Eli at 1:35 PM 4 comments

Since I've had a good amount of free time so far this summer, I've spent some of it on my latest fancy: combat robots! I remember watching BattleBots on TV many years ago and thought it was totally awesome. Ever since participating in 2.007 at MIT, I've wanted to build one of my own. I also have a friend who has built and competed with several combat robots, so that helps too. So far I've come up with two designs, both of which utilize the ever-destructive spinning weapon on top. The first is a 30 pound robot that I call Eli Wrath (a play on my name and Eli Roth, as inspired by a silly robot I made last summer in about 1 hour when I was bored).  Here are some renderings of the fully functional Solidworks model. 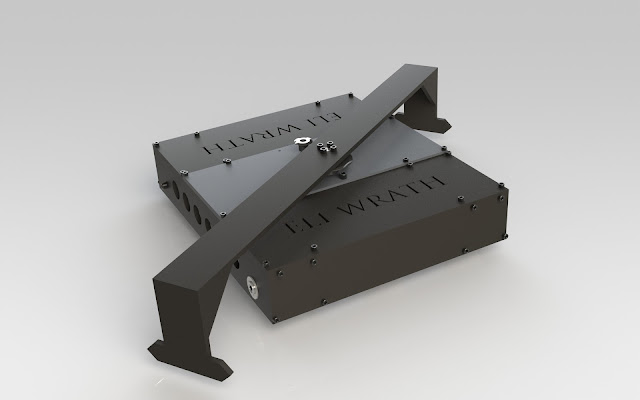 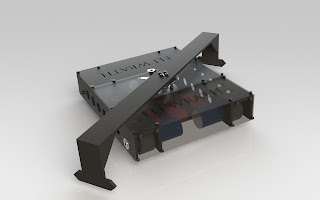 The dimensions are about 14"x12"x4", and based on the Solidworks estimate it will need some more weight reduction to be under 30lbs. I also priced out the parts to at least $500 without waterjetting. However, I still would probably want to replace the brushless hobby motors with brushed motors for more torque. Factoring this with the amount of work it takes to machine steel, I thought I would try designing a 3 pound miniature version. Thus, I present EliBot. 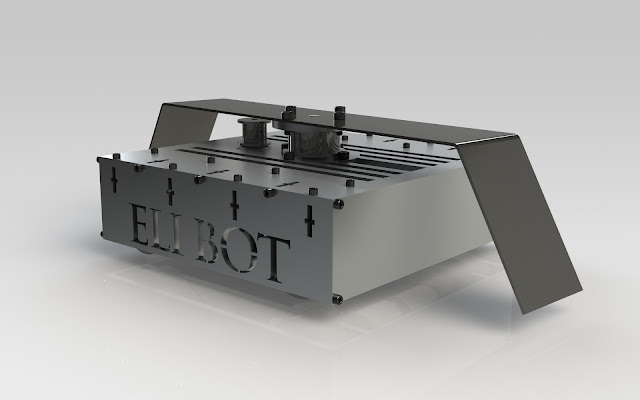 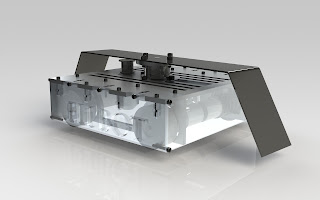 The dimensions for this one are about 7"x7"x3.5". As you can see, the frame is entirely waterjet out of 3/16" aluminum plate. I had a lot of trouble with the weight, but luckily I was able to cut out some of the frame and remove the motors from the two backwheels to come out to 2.9lbs without the electronics. Those should be pretty light, but hopefully the Solidworks estimate isn't on the low end or I might have to come up with some "creative" solutions to keep EliBot under 3lbs. With a T-slotted frame, assembly should be relatively painless, and it should cost around $300 for all the parts I need, including the waterjetting. Birthday present, anyone?
Posted by Eli at 6:43 PM 0 comments

After a busy spring semester, I'm finally done! As I mentioned in my last post, I was an assistant for the electric vehicle section of 2.007. To go along with this, I worked on Eli-Kart for my undergraduate thesis. Now that the semester is over, I can tell you all about it. But first, a video!


Eli-Kart's design has remained largely the same. See how similar they look? However, I also designed and built a large custom brushless motor that could be used to replace the hobby aircraft motor seem in the original design. I used FEA and CAD to help with the design. Here's an exploded rendering of the motor, along with the results of my finite element analysis on the motor using FEMM. 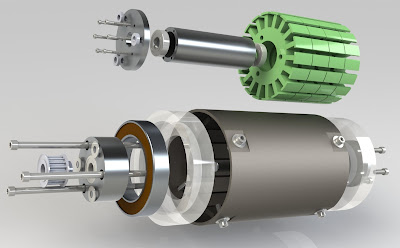 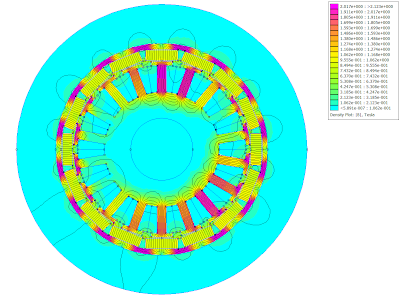 With the hobby motor, Eli-Kart tops out at about 20mph and has good acceleration (depending on the load). The motor overheats if you beast it too much though, but its good for cruising. If you're interested in learning more about the process, I created an Instructable that details the design of both the go-kart and motor.

Like last year, this spring I'm an undergraduate assistant (UA) for 2.007, which is basically an intro to design class that features a robot competition.  Over IAP I helped out preparing for the class.  I contributed a little to the contest table, mostly by painting a few things.  In the end it turned out great, and I think the carnival theme will be a lot of fun!
As seen above, there are four objects you can interact with in the competition.  At the front is a ticket booth where your robot can press the Easy Button and collect tickets.  On each side is a clown that will be holding a balloon that a robot can inflate by pumping air into a nozzle in the middle.  In the corner is a high striker, where your robot can test its strength and try to ring the bell (hammer not included).  Spanning both sides of the table is the Ferris wheel that can be spun by the robots to gain a score multiplier.

The biggest project I had over IAP was redesigning the kit display board for the class.  Each student participating in the robot competition receives a bin of materials and components at the beginning of the class.  They have to construct their entire robot from this kit throughout the course of the class, so we decided it was important to redo the old display board which was outdated and worn out.  I tried to make it look clean, with functional parts (such as the springs, wheels, and balloon pump), and here's the finished product: 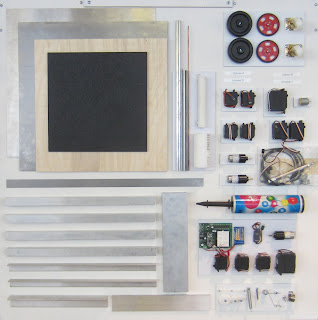 For this semester, one difference for me is that I am going to assisting the electric vehicle section instead of focusing on the traditional labs that participate in the robot competition.  I'll be helping 9 or 10 students design their own personal electric vehicle, such as a scooter or a go-kart.  It should be interesting, so I'll probably be updating any significant progress on here.  Until then I have my own project to work on!
Posted by Eli at 10:11 PM 0 comments

This is Eli-Kart!  It's a miniature, three wheeled, 2-seater go kart.  Its frame is simple yet robust, and is made up of a 1/2" sheet of clear plexi supported by steel box extrusions, allowing you to see through most of the vehicle.  It has 8" pneumatic tires, Ackermann geometry steering, and a high quality brushless motor controller.  The battery pack is pretty high powered at 39.6V and 7.5Ah which should give me around 15 minutes of fun.  Right now I'm planning on using the same motor I have on 2x4 Scooter, but I'm going to be retrofitting my own custom motor eventually.

Getting more into the details, the steering wheel will be waterjet with the words "Eli Kart" on it, then welded together.  There will be brakes on the back wheel, but the throttle is yet to be determined.  However, both throttle and brakes will be hand operated.  Other parts of the steering mechanism are waterjet and assembled with t-nuts, as you might be able to tell from the picture above.  The controller is a Kelly KBS KBS48121 with the high speed option (allowing up to 70,000 ERPM), and I will probably install external hall effect sensors on my motor so I can control it.

This has easily been the biggest design project I've done.  Luckily, doing all of the designing in Solidworks will make it very simple to build.  Apart from the welding and machining a few parts myself, all I need to do is waterjet some aluminum plate, and order some McMaster parts.  I will be using Eli-Kart in my undergraduate thesis so I'll provide updates when I finish!
Posted by Eli at 7:55 PM 0 comments

Email ThisBlogThis!Share to TwitterShare to FacebookShare to Pinterest
Labels: Eli-Kart


I just finished building 2x4 Scooter!  Its mostly functional, although the steering is a tad floppy and the throttle is a bit scary.  From the previous CAD design, I put in a few extra pieces including a piece to brace the wheels and a front bumper to help make the steering more rigid.  I also made the motor mount adjustable so I can tension the drive belt over time.

Most of the body was straightforward.  I cut the 2x4 stock down to size with a radial miter saw.  The hardest part to make was the steering column, which I used a bandsaw to cut down and sanded it with a belt sander until circular and smooth. Using 2.5" wood screws, I assembled the frame with a hand drill (although I wished I had a hammer drill).

Once the frame was together, I had to put together the wheels.  Everything I had came in parts, so I had to press some bearings into the hubs, stuff the wheel with an inner tube, screw the hubs together, and then pump up the tire.  I mounted the wheels on 200mm long M10 screws, which made for a simple axle.

Next I had to figure out the electronics.  First I went to work on the battery pack.  With some help from Charles Guan and some spare A123 26650 cells, I was able to solder up a 8S3P pack which would give 26.4V nominal (the maximum for my ESC) and over 6Ah of charge.  It took me in a few hours to make, partially due to having to hand crimp and assemble the appropriate connectors to balance the cells, but after I shrink-wrapped the whole thing it turned out nicely!

The last part to tackle was the throttle.  Using a force sensor I had leftover from a class, I wrote up an Arduino program to give me throttle control that was dependent on how hard the sensor was pressed.  Its very sensitive, but since I have some other things to work on, I'm leaving it for now.  In the future I plan to fix the throttle issue, make a new drive pulley (the current one isn't centered), and possibly stabilize/redesign the steering.  For now, here's a video!


By the way, I did pretty much all of the work at MITERS, so many thanks to them for their hospitality!

Last week I attended the New England International Auto Show.  I was pretty cool, and I got 50% off the tickets with Groupon so I went with my girlfriend Alina.  I got to explore/sit in a bunch of new cars and ogle more expensive ones, so all in all it was a good trip.  For example, they had a Fiat 500 Abarth!
There were a bunch of things I liked, including engines, rims, and various shiny things.  They even had some fancier cars such as the Lexus LFA, Mercedes SLS, and my all time favorite the Audi R8 :D